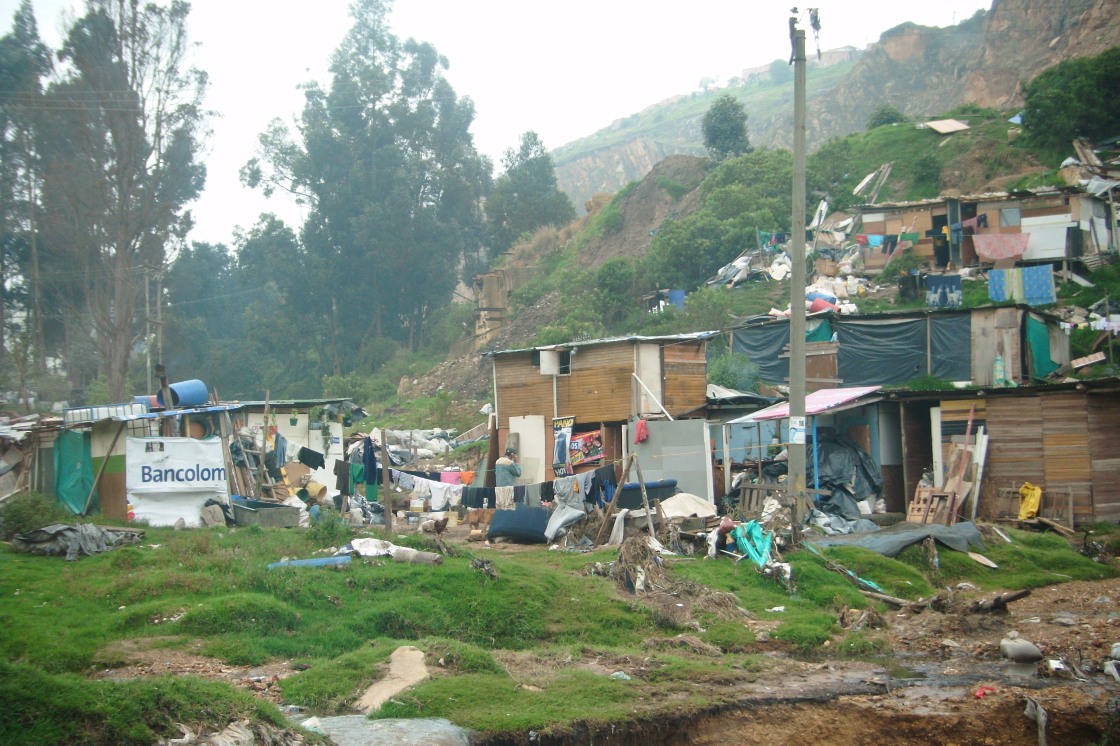 Bogotá – like every great city – has several neighbourhoods which are quietly drenched in their own infamy. Their names are near whispered, being such shameful hotbeds of crime and poverty and foreigners, particularly blonde, blue-eyed ones, are cautioned never to set foot in such God-forsaken places.

Ciudad Bolivar, in the far south of the city, is one such neighbourhood. In fact, so strong are the prejudices against Bogota’s poverty-stricken areas, I’d come to believe if I ever set foot in Ciudad Bolivar I wouldn’t come out alive.

Fortunately, that was not the case when – as a guest of language institute BSR Idiomas – I joined the Colombian haulage company Open Market on their annual visit to distribute Christmas gifts to the kids.

Now Ciudad Bolivar is poor. Seriously poor. The barrio I visited, Bella Flor, was largely comprised of roughly hewn houses, huddled against the hillside like a series of forgotten shepherds’ huts. Rubbish lined the steep ascent into the village and some people were embedded so deeply in the debris it was almost impossible to distinguish their homes from the junk.

But that was just first appearances. Look closer at the strewn waste – and certainly not everyone has the misfortune to live right in the thick of it – and you will find order among the chaos. Note the carefully strung washing lines and the bricks strategically placed to stop the plywood roofs from flying into the sunset.

Further into Bella Flor and things are better still. The huge, airy school couldn’t look more out of place – so sturdy and modern – and everywhere there is evidence of external intervention; brightly painted playgrounds and safe, colourful centres where children are given a chance in life.

Open Market works here throughout the year but Christmas, for the kids at least, is obviously the highlight. Roughly 200 children are packed into a room eagerly awaiting the same gift – a carefully labelled parcel which includes new jeans, a new t-shirt and, best of all, a decent pair of trainers.

But many of the faces are anxious. Often at home there is not enough to go around and someone has to go hungry. Many of the children fear the same deal will apply to their Christmas presents.

And first they have to eat. Open Market provides a lunch for all – a pastry, chips, rice pudding, a soft drink – and it’s in the nature of these children to horde what they can for hungrier times.

But they are gently encouraged to eat lunch together, safe in the children’s room. The supervising adults fear if the kids leave the centre laden with food, there might be someone outside waiting to take it from them. So most of the children devour their lunch, even though a fair bit of sly food smuggling still goes on.

The kids are lovely and perform several dance routines to show their appreciation before the gifts are finally handed around and, of course, no-one goes home empty handed. It’s a good day.

We take a walk around the neighbourhood before climbing into our comfy coach heading for the north of Bogota. I have to say I’m grateful for the chance to go to Ciudad Bolivar – at the very least, the trip busted some myths. The people might be among the poorest Colombians but they are still Colombians – friendly, welcoming, proud of their work.

And whilst the place needs a lot more work, it is not forgotten. The schools and playgrounds are the beginning and decent houses with food on the table will surely be the end. In the meantime, there’s Santa and his clothes parcels. Rubbish collection should probably go on the list too.

Thanks to BSR Idiomas and Open Market for giving me the chance to see Father Christmas in action and thanks to the kids of Ciudad Bolivar, particularly those who started the rumour I was Russian. Eat your heart out Anna Kournikova.