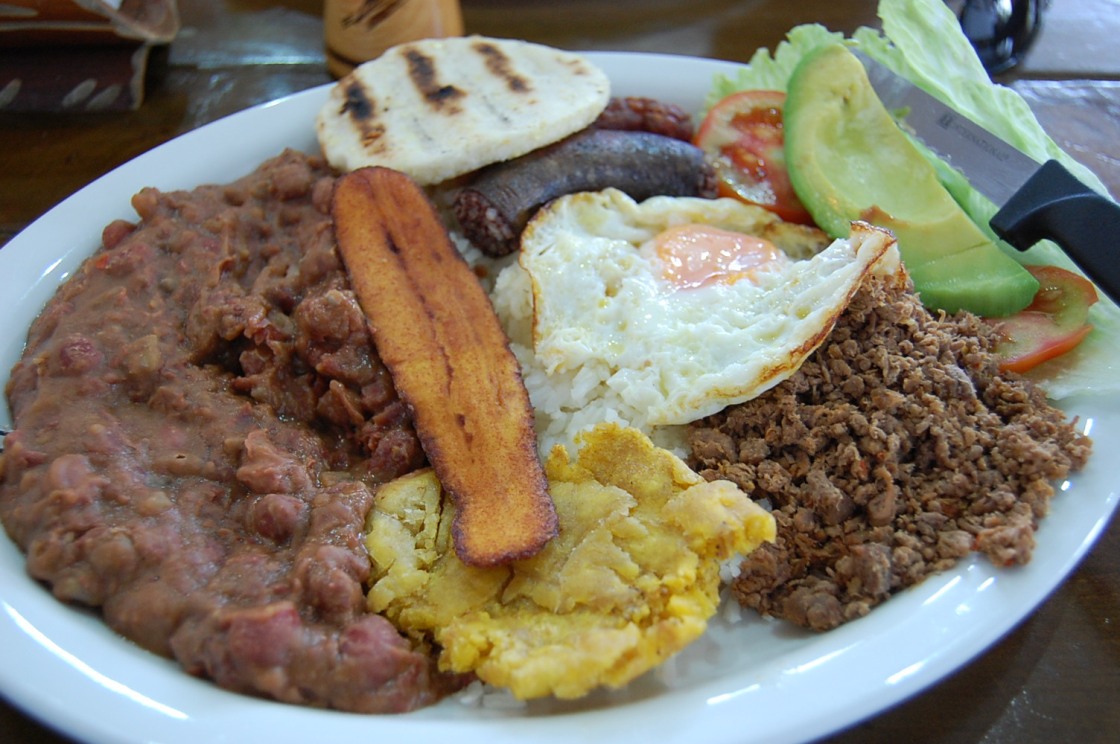 Rice, salsa and a fake size zero: Why I secretly love Colombian food

I‘m the first to admit Colombian food is not that flavoursome. If you put even a decent ajiaco or an authentic bandeja paisa against a tasty treat from, say, Thailand or India, you’re always going to have a loser on your hands. As cuisine goes, it can be a little bland.

Colombians are defensive about their food and I am defensive about Colombia, but you can’t win ’em all. I roll my eyes when Colombian friends demolish patacones (deep fried plantains hammered into pudgy discs) and say “Mmmmmmm delicious”… Honestly, if you have to shower something in salt and slather it in ketchup before you can eat it, is it really delicious? It might be cheap, comforting, hot, homely, more-ish and satisfyingly bad for you, but delicious? Really?

I am not one to talk. I am British. And while my country gave the world amazing music, decent literature and an island that somehow contains both benefits and City Boys, we do not shine in the culinary stakes. Irritatingly, we have to hand that one to the French. Fish-and-chips is our equivalent of the ‘delicious’ patacon.

Now some stiff-upper-lippers like to blame the war and rationing for the victory of hot-and-hearty over flair-and-flavour in Britain’s kitchens, but I’ve never bought it. You only have to look at the United States. Place names and Protestantism were not the only traditions that jumped on board with the pilgrims – bland food went too and morphed into the form of burgers and hot dogs.

(I always dread the food in the US and my visit to Louisiana last week was no exception. I was amazed, therefore, to discover the delicious jambalayas and rich shrimp sauces until I remembered the French got there first. Fortunately, in this case)

Of course I’m being flippant. Both Britain and the US have benefited hugely from immigration. It’s no coincidence the humble curry was Britain’s favourite dish for years nor that we have a huge fondness for Chinese. Both cuisines have long since been Anglicised, though – just like tea, we’ve made them our own.

What a difference it has made to my body.

At first, the gin-and-tonic and apple-crumble weight I shouldn’t have been carrying, simply disappeared. I don’t do any more exercise here – more dancing perhaps, less spinning – and they still have Dunkin’ Donuts. The only difference then, is the everyday food. I’ve started to wonder if I ever ate real food at all.

In Colombia, chicken looks like chicken. It can be a bit scrawny or slightly off colour and no two bits look the same. Just like chickens. Think about the uniform plumpness you see in Britain. Don’t you think that’s a bit weird?

The same goes for fruit and vegetables; tomatoes here are different sizes and colours, bananas can bend a multitude of ways and don’t get excited about the strawberries. I have a Colombian friend who swears he stopped living in the United States because he started having nightmares about the uniformity of fruit.

So I am slimmer and I think the US might be going the other way – based on my trip to the ironically-named Banana Republic at least. I tried on a size two dress in the Miami store, then collapsed in giggles as I asked the Peruvian assistant to grab me a size zero. No amount of rice and salsa could turn this 6ft sugar addict into a genuine size zero, which can only mean they are making the clothes there bigger. Terrible eh?

Still, it was probably why, despite the Louisiana loveliness, I came back desperate for real Colombian food and my dear boyfriend, now very used to hanging out at El Dorado airport, immediately swept me off to our local cafe for a 7,000 peso special – rice, beans, soup, chicken, the whole shebang.

The plates were huge and everything, as expected, was comfortingly familiar, but he couldn’t help noticing the envious glances I was sneaking at the plates of other diners.

“Are you alright?” he asked eventually. “What’s missing?”

“Oh nothing,” I replied grumpily.

“I was just really craving a patacon.”