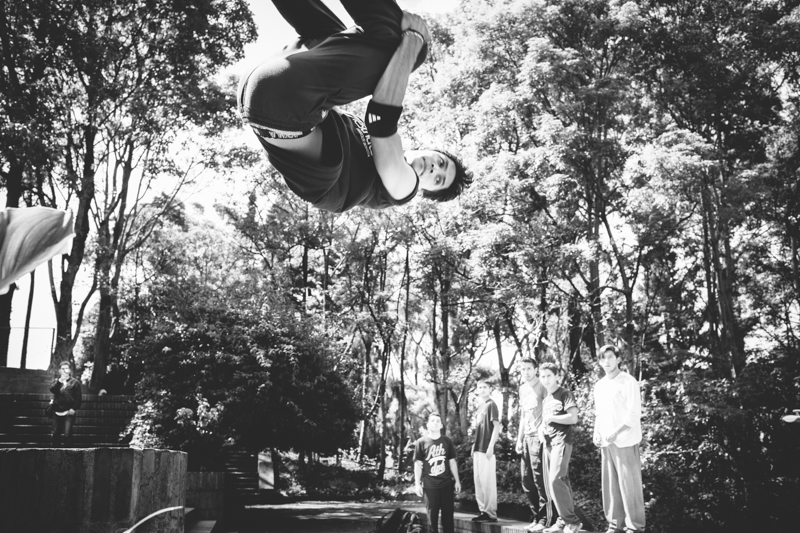 There are many reasons to love Bogotá but it’s entirely possible the city’s chaotic, frequently cracked and somewhat clumsy streets are not one of them. I think the biggest problems are the random obstacles, the discarded bricks and paving slabs, the unexpectedly open manholes, even the desolately skinny trees surrounded by sleeping dogs and, often, sleeping men.

You certainly don’t walk around with your eyes closed in this town, you never know where your next step may fall. So perhaps it’s no wonder Bogotá – stuffed full as it is with challenges and unpredictability – is a natural temptress for those who love nothing more than conquering whatever is in their path.

Anyone who has so much as looked out of the window of a car, bus or taxi here will have seen people practising Parkour, even if they were unaware that this strange discipline has a name.

Parkour or free running is practised worldwide though, the idea being to climb, run, jump and balance past the challenges of every day objects with free runners following their own techniques and philosophies, including the idea that humans should reclaim their own terrain and interact once again with their environment.

Devotees work hard to find new ways to scale walls, cross stairwells and navigate their way past anything, in the manner you would least expect. It’s an unusual non-competitive cross between an art and a sport and one that requires agility, skill and strength, both mental and physical.

I found Les Chats, Bogotá’s most well-known Parkour outfit, training one Saturday morning in a park in La Macarena, which is well-known for giving a warm Bohemian welcome to every form of art and expression. Passers-by were certainly not as surprised as you might think to find fifteen men repeatedly scaling a 2.5m wall before performing neat forward rolls over a flight of stairs (that wall, by the way, is ‘small’ according to the guys. They usually practice on walls of around 3.5m)

It’s a serious business though. The techniques are explored, explained and carefully coached. Movements are watched carefully too while success is applauded and any and all mistakes quietly rectified.

Richard Alvarez, the 33-year-old Bogotano who co-founded Les Chats – believes this co-operation within the group is the essence of Parkour’s attractiveness.

“It’s non-competitive so there is no pressure to be better than anyone else,” he says, “The only person you have to beat is yourself.”

This ‘beating yourself’ – or facing your fears and pushing your own limits – is clearly a big draw for the guys he trains. While Parkour may provide excellent physical training – and everyone here certainly looks in great shape – it also strengthens the mind.

Hugo Rodriguez, 42, says he started training with the group after seeing videos on the Internet. Formerly an avid soccer player, he decided to try and copy some of the Parkour moves. When he realised it was more technical than he had expected, he joined Les Chats and ‘transformed his life’ he says.

“I used to be the sort of person who would feel nervous or anxious, but I don’t get that at all anymore,” he says.

“Parkour reduces your stress and it teaches you that you can achieve things you never thought were possible.”

Mental strength is a key component in Parkour. While Richard and his team may painstakingly explain each movement and watch carefully as each member of Les Chats repeats it numerous times, it’s the mental focus that really allows each person to perform what’s needed.

Richard says: “Parkour gives you a lot of control over your own mind. You have to focus, you have to concentrate and you have to employ the small changes as much as the large ones.

“We work very hard, repeating the movements over and over again to ensure everyone feels comfortable and has faith in their own mind and body.”

The guys all agree that Parkour has changed their attitude – not just to life but to the city around them too. What may seem like an obstacle to us is a challenge to a devotee of Parkour.

“Parkour has made me see it’s possible to approach life in a different way,” he says.

“For most people a wall is just a wall but we approach it differently. We’re always thinking about what move we can try.”

Parkour is a strange mix between art and sport, which is probably why no-one seems particularly inclined to define it as either. They guys insist that individuality and freedom of expression are a lot more enshrined in Parkour than they are in traditional sports, where most athletes are trying to perfect a single technique.

“With Parkour it really doesn’t matter if you are young or old, male or female. Everyone has their own strengths,” Richard says.

Yeison agrees: “You don’t need anything for Parkour. It’s not like you need expensive kit or an expensive piece of equipment. You just need a good pair of tennis shoes and a comfy tracksuit.”

Yeison, like many of the guys, is so devoted to Parkour he has built his whole life around it. He doesn’t smoke or drink and he’ll practise moves whenever he has time, which can be as much as two or three times a day, three or four days a week.

“I’m committed to a good lifestyle,” he says. “It’s about doing everything you can. The idea is to strengthen the body, that way you don’t have as many injuries and, of course, when you trust your body that helps the mind to be strong too.

“If I decide I want to do a movement but I don’t feel strong enough, I’ll never be able to perform it.”

Hugo, similarly, is so fond of Parkour he’s encouraged his 16-year-old son, Hugo Felipe, to train with him too. He insists the transformation in his son is obvious.

“He’s so mature, independent and focused on whatever he is doing. Parkour teaches you to face your fears. Sometimes we all look at something and believe it cannot be done, but it can.

“Parkour is great for kids because it gives them a new way to look at life. When a situation arises they can think, okay, there must be another way to deal with this. Because there always is.”

It is great to watch a Parkour training session. Energy and camaderie crackle in the air. The unity and belief in teamwork is obvious. But it’s also worth scouring the streets and parks of Bogotá to watch those training alone or in pairs. There you will see the extremes of concentration and focus.

“I think Parkour really does bring out the best in people.”