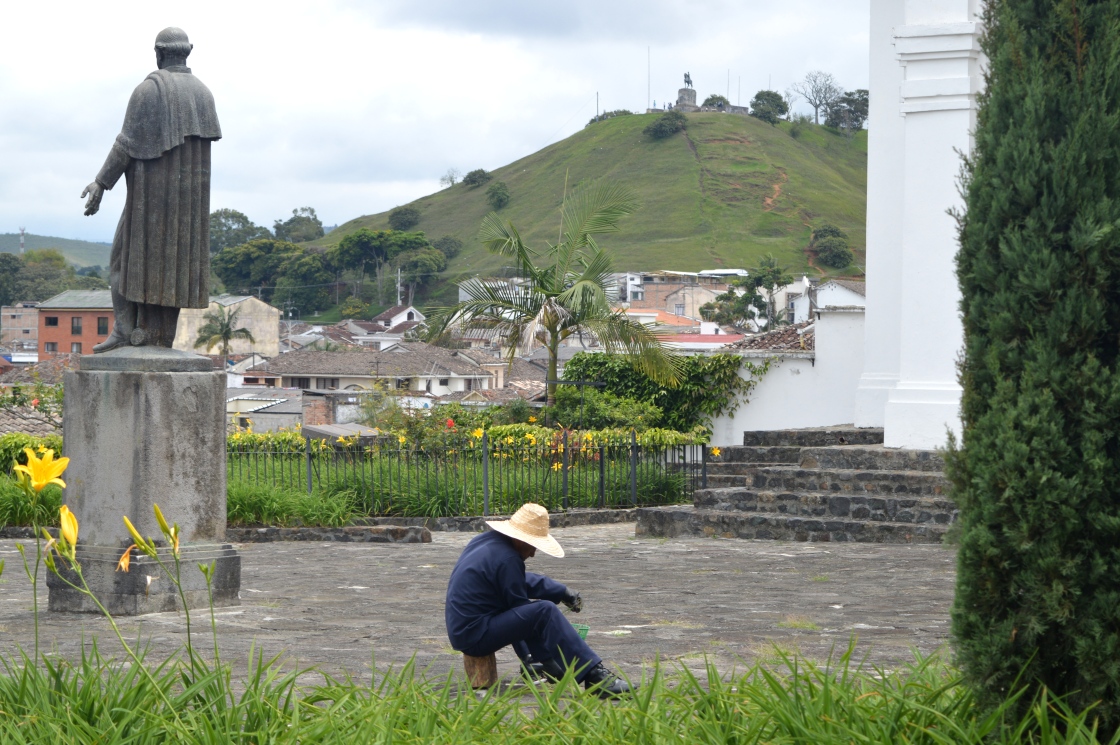 Is it time to start kissing invisible Colombians?

When I was eighteen I wanted to travel to two countries on the opposite side of the globe and my father, who has a work ethic, said he would only contribute financially to that dream if I got my ass into the world and worked. He put me in touch with an agency who sent me to a factory so I could work in their kitchen and save enough to travel.

I was a pot washer and from 7am to 3pm I was huddled over a sink with a metallic sponge, scrubbing burnt food from an array of enormous cooking pots. My respite came at 10am when the men from the factory flocked to the kitchen so I could serve them toasted (often burnt) cheese sandwiches and a cup of tea. They were amused, either by the greasy hair that stuck to my sweaty face or the short skirts I lived in, and they treated me as one of their own. They teased me, played tricks on me and they called me by my name.

I was muy consentida and by the end of the week, I was in tears. My back hurt, my arms ached, my hands were raw. I called the agency and begged them to send me somewhere else. They sent me to a fancy pharmaceutical company on the other side of town and told me I would be serving the sandwiches sold in their equally fancy canteen. It was the first time I had heard the words ciabatta, focaccia and brioche. I was delighted.

As the weeks wore on, I noticed something strange. It started with my fingertips and it soon spread to my face. I was becoming invisible. The people who came to our canteen, or cafe as they called it, were fabulously dressed with their power suits and pencil skirts but not one of them could see me. Any of me. They ordered their focaccia and their posh brioche without so much as a glance. Once I heard one of them say, “Ask the sandwich girl,” and I thought, “Who’s the sandwich girl?” and, of course, the sandwich girl was me.

I forgot all about that until last week when a television company called and asked if they could make a micro-documentary about the life of a British writer in Bogotá. We soon realised that images of a thirty-three year old woman sitting at a computer in her pyjamas would make for terrible television, so I offered to involve a few of the people in my life and one of the people I chose was Don Blas, the man who sells us flowers, our flower man.

Don Blas is a displaced man too. He told my partner he was among the six million or so Colombians forced to give up everything they owned, or ever dreamed about, to flee the horrors of the countryside for the relative safety of the city, where he built a new life selling flowers in the middle of our three-lane road. Neither of us liked to ask any more so that was all we knew about Don Blas, until the day we came to film him.

Television is a dull beast, it involves doing the same thing over and over again and filming it from different angles and Don Blas obviously had his mind on other things too because at one point he turned to me and said, “I want you to know that I finished high school.”

“Huh?” I said, trying not to drop the bunch of yellow roses that was our only prop.

“I finished high school,” he said.

“What about university?” I said, because there was nothing else I could ask.

“I wanted to be a paramedic,” he shrugged, “But… you know,” and he gave me that blank, unwavering stare that in Colombia means: “We all know what happened next.”

I think we’ve bought our flowers from Don Blas every week for the past two years and that is the first time I have thought of Don Blas, the man with the upturned hat and weatherbeaten cheeks, as anything other than a flower man, or a displaced man, and now every time I see him I am determined to see him, and speak to him, as Don Blas, the man who would have been saving other people’s lives if Colombia hadn’t been such a fuck up.

It made me realise that my life is filled with invisible Colombians and I’m disgusted with myself. Look at how confused I felt when I was invisible for five minutes. Can you imagine how it would feel to be invisible for fifty years?

I discussed this with a friend of mine and we recalled the time, in my first few months in Colombia, that I left an office building where I worked in the company of a colleague and a woman called Rose, who was our coffee lady. I said goodbye to them both outside the building. I gave my colleague a kiss on the cheek and then I kissed Rose too. She froze. My colleague laughed and when I asked why the following day she said, “You don’t kiss Rose,” and I said, “Why?” and she said, “She’s the coffee lady.”

Once a year I see a man who owns a company that contracts me for a lot of work at a board meeting, and every time I greet him and I bid him farewell and, every time, I give him a kiss on the cheek. On mornings when I actually have to go out into the world to work, I see a coffee lady and, usually, it is the same coffee lady, a woman called Hortensia (I hope that’s how she spells it) Hortensia rides a bus for two hours every morning to get to work, which is more than an hour before I arrive, but she still listens to me moan about TransMilenio and she still makes me coffee and she still smuggles me biscuits and when I leave work, do you think I kiss Hortensia?

Perhaps I should just kiss her. Perhaps then she’ll drop all this doctora nonsense, before I get too used to it, and she’ll tell me she dreams of saving other people’s lives and I’ll be like, “Cool, why not?” and we’ll just be Hortensia and Vicki, the coffee lady and the one-time sandwich girl, and both of us will be visible.